How to play eighth note triplets

How to play quarter note triplets

How to play half note triplets

Almost any note value can be turned into a triplet. Triplet half notes are a group of three halves that are played in the duration of time that would usually be taken by two half notes. Their length can be determined by subdividing the beat into triplet eighths and triplet quarters, as shown below.

How to play rhythms with mixed subdivisions

When we are performing music in simple meter that has triplets, it is best to count the triple subdivisions for the entire passage. However, music with triplets often includes duple eighth notes, too. When a section of music includes both duple and triple rhythms, alternate between counting “1 and 2 and,” and “1 k d 2 k d,” depending on what type of note value is present.

Learn how to play double dotted notes in Lesson 17. 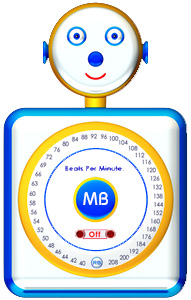